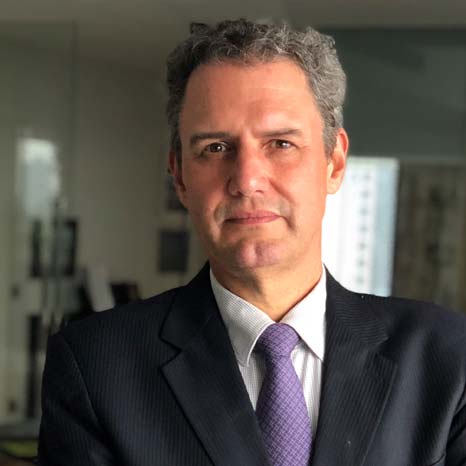 Marcos S. Jank is CEO of the Asia-Brazil Agro Alliance (ABAA), a partnership that brings together select agri-food trade associations and the Brazilian Export and Investment Promotion Agency (Apex Brasil). The objective of the organization is to enhance the profile of Brazilian agribusiness in Asian economies by expanding relations with governments and stakeholders in the region.

From 2013 to 2017, Dr. Jank was Vice President of Corporate Affairs and Business Development of BRF Asia-Pacific. From 2007 to 2012, he was the CEO of the Brazilian Sugarcane Industry Association (UNICA), main sugar-energy trade association with 136 member companies. He was also the founding president of the Brazilian Institute for International Trade Negotiations (ICONE), one of the country’s leading agribusiness think-tanks. In 2001-2002, he served as Special Expert in Integration and Trade at the Inter-American Development Bank (IDB) in Washington, DC. He also held consulting and project coordination positions at the World Bank, IDB, FAO, OECD, UNDP, the Hewlett Foundation and other global organizations.

Jank has a 18 years career as Associate Professor at the University of São Paulo’s (USP) faculties of Economics (FEA) and Agricultural Sciences (ESALQ), with sabbatical periods in U.S. and European universities. He holds a Doctorate from the USP School of Economics and Business (FEA), a M.Sc. in agri-food policies at IAM Montpellier-France and a B.Sc. in Agronomy at ESALQ. He is also Member of the Board of Trustees at the International Food Policy Research Institute (IFPRI) in Washington, since 2017.