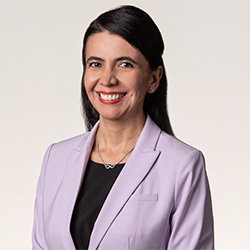 Pilar is president of Cargill’s compound animal feed and nutrition business, with responsibility for serving customers and leading more than 11,000 employees in nearly 30 countries.

Pilar joined Cargill in 2002 as an Associate in Corporate Strategy and Business Development. Her operational experience began when she was appointed General Manager for the Beef Business with Cargill Meats Canada. She soon moved to Oklahoma City where she led our business in South Central US. From there, she moved to Costa Rica to successfully lead Cargill’s integration of Pipasa, our poultry acquisition in Central America. She then led Cargill’s poultry operations in Nicaragua, which then led to her to be appointed as Business Unit Leader for Cargill Meats Europe.

Throughout all of her assignments, Pilar has played a critical role by developing and empowering strong teams, executing sustainable strategies, turning business around, taking care of existing customers, acquiring new customers while never compromising Cargill’s value and increasing profitability of our businesses around the world. In 2013, Pilar was named President and Business Unit Leader for Cargill Meats Europe; and in 2015 she was named Corporate Vice President and head of Corporate Strategy and Development.